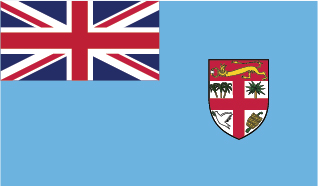 Officially the Republic of Fiji is an island country in Melanesia, part of Oceania in the South Pacific Ocean. Fiji consists of an archipelago of more than 330 islands — of which 110 are permanently inhabited—and more than 500 islets, amounting to a total land area of about 18,300 square kilometres (7,100 sq mi). The two major islands, Viti Levu and Vanua Levu, account for 87% of the total population of 898,760. The capital, Suva, on Viti Levu, serves as the country's principal cruise-ship port.
Fiji has one of the most developed economies in the Pacific,  thanks to its abundant forest, mineral, and fish resources. Its currency is the Fijian dollar, and its primary sources of foreign exchange are its tourist industry and bottled water exports.
Indigenous Fijians make up more than half the population; about another two-fifths are people of Indian descent. Before Fiji became an independent sovereign state on 10th October 1970, it was a Crown colony.
English, Fijian, and Fijian Hindi were given equal status as official languages by the 1997 constitution. Most people speak at least two languages, including English and the language of their ethnic community. Almost all indigenous Fijians are Christian, mostly Methodist. Most Indians are Hindu, though a significant minority are Muslim.