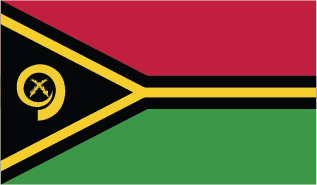 Vanuatu is a small island nation in the South Pacific Ocean. The islands were inhabited for thousands of years prior to being discovered in 1606 by Portuguese explorer Pedro Fernandez De Quiros. In 1774 Captain Cook visited the islands and named them the New Hebrides.
Vanuatu was a joint French and British Colony until it gained independence in 1980 when it changed its name to the Republic of Vanuatu.

Even though agriculture and forestry make up only 25% of Vanuatu's annual GDP - throughout Vanuatu, subsistence agriculture is the mainstay of the village economy, with 80 percent of the population living in villages. Food crops produced include taro, yams, kumara (sweet potato), bananas, coconut, and a great range of fruit and vegetables.

National motto: For God and Country