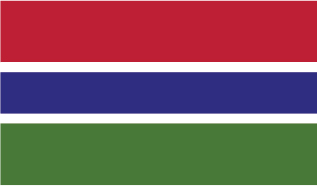 The Gambia is a small West African country, bounded by Senegal, with a narrow Atlantic coastline. It's known for its diverse ecosystems around the central Gambia River. Abundant wildlife in its Kiang West National Park and Bao Bolong Wetland Reserve includes monkeys, leopards, hippos, hyenas and rare birds. The capital, Banjul, and nearby Serrekunda offer access to beaches.

The Republic of The Gambia, commonly referred to as the Smiling Coast of Africa, is situated in the western region of Africa. It has a land area of 11,295 sq. Km (4361 sq. miles) with an estimated population of 2,000,000. The agriculturally fertile country, dominated by farming, fishing and tourism has its capital in Banjul.
The official language is English, and the local languages (dialects) include but not limited to Mandinka, Wolof, Fula, Serer, Jola, Manjago, Karoninka, Sarahule and Aku.
The government has invested in the agriculture sector because three-quarters of the population depends on the sector for its livelihood. Agriculture is mainly subsistence rain-fed agriculture meaning that The Gambia is largely reliant on sufficient rainfall for its farming.

Cooperation with AICAT began in 2019